How SP4PHC is Helping Governments Respond to Covid-19

ThinkWell is joined by Indonesia’s premier institutions in health financing – the Center for Health Economics and Policy Studies at the University of Indonesia and the Center for Health Policy and Management at Gadjah Mada University. The HFA team also includes Results for Development, an international leader in strategic purchasing methods to pay health service providers for efficient, quality health care.

The health sector currently faces several challenges. No matter how you slice it, Indonesia spends far less on health than its regional peers. On a per capita basis, Indonesia spent only $115 in 2017 on health, the lowest among the Association of Southeast Asian Nations (ASEAN) (see figure). As a percent of gross domestic product (GDP), health captured only 3.2% of GDP in 2017. In addition, household out-of-pocket spending is still high at 31.8% of total health spending, and the financial sustainability of JKN is threatened due to the ever-increasing deficit.

HFA collaborates with Indonesian leaders and institutions to strengthen health financing as a lever to propel Indonesia towards achieving universal health coverage. Indonesia has many comparative advantages among middle-income countries, such as stable government, economic policy, and growth. The design of HFA recognizes these strengths by prioritizing capacity building of government agencies, civil society, media, academic institutions, and the next generation of health financing experts. The goal is to enable these institutions, groups, and individuals to engage, generate, and use evidence without external assistance, so they continue the journey independently toward financially sustainable universal health coverage. 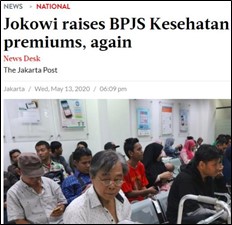 JKN, managed by the Social Security Administrative Body (BPJS-K), has run a deficit every year since its launch. To improve the financial sustainability of JKN, HFA supported the MOH to raise awareness about the need for a rationale increase in premium contributions. This contributed to the successful passage of a presidential decree to raise premiums in an equitable manner. The new premium policy will improve the financial sustainability of JKN, fully subsidize the poorest Indonesians (40% of the population), and partially subsidize the informal sector.

In 2020, a new issue of excluding primary care services like maternal healthcare and infectious disease services from the JKN benefit package became a hot topic. Such an exclusion would fragment the delivery of these essential services nationwide. HFA seized the opportunity to contribute to the debate with a policy brief explaining the advantages to the beneficiaries of keeping MNH, TB, and HIV services within the JKN benefit package. HFA’s current work on strategic purchasing for TB, MNH, and HIV services will strengthen the evidence that integration will produce best outcomes for the Indonesian people.

Indonesia has a shortage of qualified health economists. HFA addresses this need by building a network of mid-career health financing experts who bring evidence and informed advice to policymakers. ThinkWell’s Ryan Nugraha, a mid-career economist himself, is managing the effort that has achieved several early successes: 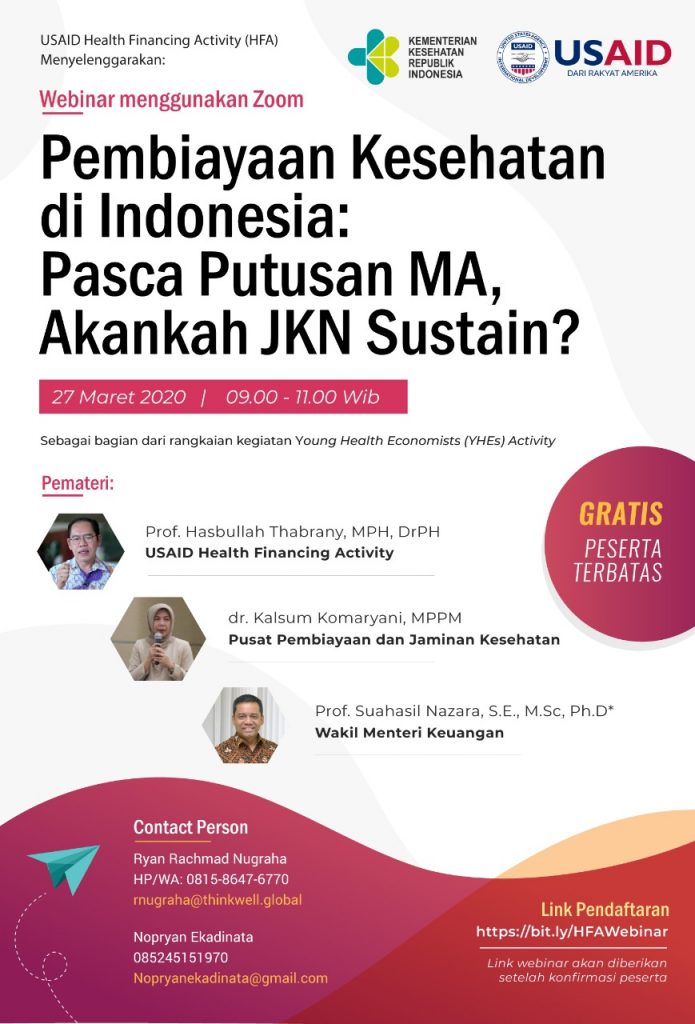 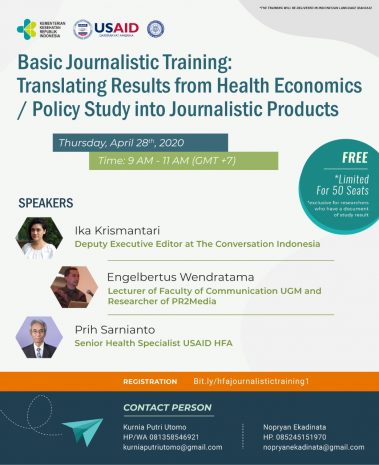 Under USAID’s Health Policy Plus (HP+) project, ThinkWell performed an analysis of Indonesia’s private sector engagement in the health sector. The analysis focused on identifying opportunities to create or expand private sector involvement to fight maternal and newborn mortality.

The growth of Indonesia’s economy has led to growing interest from investors in health markets. The establishment of the national insurance scheme (“JKN”) has signaled to the market that the government is committed to financing healthcare and increasing access for its citizens. At the same time, the middle class is growing, estimated to reach 135 million people by 2030, and the utilization of private facilities and pharmaceuticals is expected to increase.

Given the relatively small contribution of donor funding (less than 1%) to Indonesia’s national health expenditure, the donor community is recalibrating and looking to ensure that their resources have a catalytic impact on the health system. By partnering with the private sector, USAID seeks to leverage expertise and resources to maximize impact. ThinkWell’s investigation assisted USAID to better understand the opportunities for private sector engagement in reducing maternal mortality in Indonesia.

Indonesia experiences almost 15,000 maternal deaths and 90,000 newborn deaths every year. The country failed to meet its Millennium Development Goals on these two indicators, and is struggling to catch up to its peers in the region. Private sector health providers dominate more than a third of the market, and their market share continue to grow. As the government of Indonesia rolls out its national health insurance scheme with the aim of enrolling all citizens by 2019, there is a powerful incentive and need to engage with the private sector.

To better understand the opportunities for the private sector to reduce maternal mortality in Indonesia, under the HP+ project, ThinkWell conducted a landscape analysis across 10 provinces. The team interviewed representatives from 128 private sector entities, including banks, private equity firms, private hospitals, midwives, startup incubators, transportation and consumer goods firms. The assessment focused on key health system drivers that affect access to, and the quality of, maternal and newborn health services. It then identified opportunities for private sector intervention.

Through this analysis, the team identified five themes, or opportunities, for investment:

The growing health sector space offers opportunities for investment from many sectors. Greater financial access to health services will increase the number of patients seeking care from health facilities and offers the prospect of expanding infrastructure. In addition to guaranteed health services under JKN, a multitude of support services will be needed by public and private providers, creating opportunities for innovation from startup companies, technology companies, and others looking to enter the market. The entry points are many, depending on the level of innovation that a company offers and the issues they want to improve. Within the five themes identified by our team, a number of entry points are laid out to provide concrete examples that could interest for-profit companies, while also offering real solutions to Indonesia’s too-high maternal and newborn mortality ratios.